Since JBL has apparently been slacking off lately with individual reveals, here’s a look at each of the “two-packs” as well as some thoughts on the roster as a whole.

Just a quick note: it was announced at the last Joe Con that these figures would be sold in pairs.  If you want one– you have to get its pack-mate as well.  Without further adieu, let’s start the breakdowns…

END_OF_DOCUMENT_TOKEN_TO_BE_REPLACED

I get it… not every one of these previews can be a winner.  In the case of Dodger… yeah, I don’t know what happened.

Several years ago, I sat down and reviewed the 1987 Battle Force 2000 Dodger figure.  Of all of his compatriots, Dodger was the most realistic looking in terms of overall design.  From this sculpted web gear, to the darker hues of green and orange used for his uniform, to the helmet design, the Marauder driver conveyed the impression that his design might be plausible someday in the future.  The only thing about his design that seemed truly fantastic was his rifle and that was my least favorite part.

I don’t know– maybe it’s the fact that this image is HEAVILY Photoshopped.  Maybe it’s the fact that the odd hue of metallic green is so prevalent that it overpowers the entire image.  I just know that the figure that I was looking forward to the most in this Joe Con 2017 isn’t all that and a bag of chips in this preview.  At all… (Plus, I really really hate those gimmicky Snake Eyes legs.)  He’s missing some of the bulk that made the original Dodger so impressive. Plus, where’s the comms gear from his helmet?

We’re now over the halfway point when it comes to the previews of this year’s set.  So far, the reaction online has been “lukewarm” to the set.  Hopefully the remaining three previews will knock it out of the park as fans have been requesting Battle Force 2000 for years now.  (I hate to think of what the Club will charge for the souvenir vehicles this year.)

Here’s the roster, just in case:

According to the convention brochure, this year’s Joe Con 2017 boxed set will retail for $410.00.  Also, there’s no word on souvenir pricing at this time although it’s a safe bet that prices will remain at or around levels seen in both 2015 and 2016.  Regardless, it will be interesting to see how the Club intends to replicate the signature vehicles of this DARPA-inspired team.  Could another RHINO re-release be in the works?

For more information on this year’s event at Walt Disney World, visit GIJoeCon.com!

Zilant and Dodger will be getting their own sweet rides this year in the form of specialized foam gliders!  It’s the very essence of a simple-but-effective exclusive and one that suits a fan-run convention perfectly!  (It’s also something that makes me curse my family-obligated inability to attend even more!) 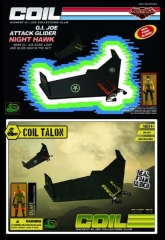 Here’s the latest on the con pricing and sales:

The COIL CON III exclusives this year will be sold starting at 10AM. The show starts at 9AM. They will be $125 per boxset which includes 2 carded figures and 2 gliders per box. Limited to the first 40 attendees. Please, visit the official website athttp://www.coilcon.com/ for more information.

G.I. Joe fans are an enterprising and industrious lot.  If there’s not a convention anywhere near them, then they’ll start they’re own.  More importantly, if they want an exclusive G.I. Joe figure for that event– they’ll make their own!   Take, for instance, the 2012 Coil Con Dodger:

“A simple and elegant reuse of existing tooling” would be my first comments on this figure.  It uses the AWESOME 30th Anniversary version of Duke for the body and the open mask head of the G.I. Joe Renegades Cobra Trooper to give it identity.  It’s an inspired parts choice that really evokes the original 1989 BF2K Dodger figure.   Coil resident designer/fabricator/”figure guy” Jay Hunger really knocked one out of the park with this one.  It really makes me wish I didn’t have a family-related conflict that weekend as I’d snatch these up like a second Renegades Storm Shadow at retail!

Coil Con will be held on September 8, 2012, at Kokomo Toys and features specials guests including: