Looking to catch up on some G.I. Joe knowledge?  Check out G.I. Joe Basic Training!

Let’s be honest– the G.I. Joe brand isn’t exactly a simple property for new fans to dive into.  In terms of A Real American Hero continuity you’ve got the original Marvel Comics series, followed by Devil’s Due Publishing (which was retconned away), and then IDW’s current titles.  In terms of animation there’s the classic Sunbow series, the DiC follow-up, Sgt. Savage, G.I. Joe: Extreme, Sigma 6, Resolute, and Renegades.  Let’s not forget the films in which Paramount pictures concocted a stew based on ingredients from many of the previous properties blended together with a healthy dose of creative license. All of this is just scratching the surface!

To new eyes, it can be a confusing mess of alternate versions of Ripcord and Snake Eyes, Baroness/Duke/Destro love triangles (thanks for that Rise of Cobra), and conflicting origins.  What’s a fan to do?

Enter “MacDowin”.  Long-time G.I. Joe fan and former YoJoe.com staffer, he’s taken on the task of producing short topical videos that shed some light on our favorite brand of “Real American Heroes.”  Focusing initially on the ARAH-side of things, the “G.I. Joe: Basic Training” series tackles a single aspect of the brand in a weekly video.

You can check out Episode 1: Continuity below!

I won’t lie– when MacDowin and I talked about this we discussed what a herculean undertaking this would be.  Where do you start?  Where do you end?  Does Ice Cream Soldier eventually get his own episode?

Thankfully, MacDowin was up to the task!  In fact, he’s current THREE episodes in with a fourth dropping soon. So, if you’re looking to catch up on your G.I. Joe facts or just want some Joe-related content in your YouTube feed, check out G.I. Joe: Basic Training!  If you like the episodes, hit the “subscribe” button so that you’ll never miss out on an single installment!

On Monday, August 14, 2017 MOST of the Hasbro SDCC exclusive items will hit HasbroToyShop.com!

“And there came a day unlike any other…”

No, we’re not talking about the first ever team-up of Marvel’s Avengers! Monday is going to be Summer Exclusives Day at HasbroToyShop.com.  That’s right– it’s that “magical time” (Read: FRUSTRATING) day in which fans from across the world will all be hitting HasbroToyShop.com and using their F5 keys to refresh their browsers in order to get the items they want.

Have no fear, Joe fans!  While we don’t know WHEN everything is going to drop– we do now WHAT the URL’s of the exclusive items will be.  To save yourself some time and some hasty item searches, here are all of the items and the pricepoints on each that will be dropping on Monday:

You can also see the FULL ITEM LIST if you’re looking for more than one item.

Good luck to everyone who is hitting the site tomorrow.  May you all get everything that you’re after!

SDCC 2017 is in full swing and G.Hasbro’s annual G.I. Joe exclusives are very much on everyone’s mind!  However, it would seem that those of us who are stuck at home know just when the sought-after comic con items will be dropping on HasbroToyShop.com.

Yesterday, two product listings were quietly added to the website.

Included in each product description was the note “available 8/14”.  Apparently that day, the second Monday in August, will be when fans from around the globe will be hitting the site, frantically hitting F5 to refresh their screens in the hopes of completing their transactions before the items sell out. While the exclusives of the past few years have been pretty easy to obtain, there’s something about this year’s two G.I. Joe-related SDCC items that feels very different.

I’m not going to lie– I’m giddy over the prospect of BOTH of these sets, for very different reasons.  Nostalgia plays a heavy hand in my love for both sets but I’d be hard-pressed right now to choose one over the other if I had to prioritize dropping one in my cart first.  One one had there’s the AMAZING recreation/update to the Cobra Missile Command Headquarters but on the other hand there’s the IDW Hasbro Comic Crossover Mega-Set that includes Renegades Roadblock, ROM the Space Knight, and the Micronauts.  Decisions, decisions.

Regardless, August 14th is the day to put on your calendars kids!

The guys at What’s On Joe Mind have released Episode 34 of their ongoing podcast series.  Here’s the synopsis according to General Hawk:

Oh don’t worry, we still spend some good time talking G.I. Joe comics with John Barber, but we also devote some attention to the awesome G.I. Joe: Retaliation trailer and manage to talk about some other G.I. Joe stuff as well.  There’s a little of everything here!

Check out our Podbean page, or hit up the embedded player below. 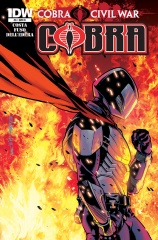 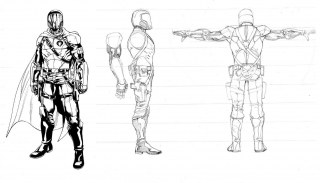 If you want to be spoiled as to who the new Commander is, check out this interview at USAToday.com.

You’ve been warned… the article pretty much spills the beans.

What isn’t so spoilery is that the new Commander’s look is also revealed and it’s a pretty dramatic change.  In fact, it’s also hauntingly familiar to fans of Sigma 6.

Check out the “Commander’s new robes” below and check out G.I. Joe #8 on shelves tomorrow!  (Until then, there’s a preview on Scribd.com.)