In addition to those pieces, several previous FSS figures have seen a price drop from $38.00 to $29.00 including: END_OF_DOCUMENT_TOKEN_TO_BE_REPLACED

When it comes to new product, G.I. Joe fans are in the middle of a dry spell.  That last Retaliation wave only contained 3 new figures and is proving as elusive as finding a sasquatch in the middle of New York City.  However, last week the G.I. Joe Collector’s Club shipped the first two figures from their second Figure Subscription Service.  Here’s where I spoil the surprise– it was an all Tiger Force shipment!  I was initially pretty luke-warm about these two figures when they were announced however, sometimes having a figure in hand can make all the difference.

So, how does Airtight hold up? Check out the review of Tiger Force Airtight in the Collector’s Club Review Index here at JBL!  Look for Shipwreck to drop by Monday!

With a whirlwind of updates in the past 24 hours, the G.I. Joe Collector’s Club has announced that sign-up for the Figure Subscription Service 2.0 is now LIVE!!!  You can subscribe for the next 13 figures from now through May 22, 2013!

It all started with this image that was posted on the GIJCC Facebook page yesterday afternoon:

At that meeting just a few mock-up images were shown as Lanny confirmed he’d only just been able to put them together before leaving for Indy.  Now, the Club has unveiled FOUR preview images: Skullbuster, Night Force Falcon, Dragonsky, and Tiger Force Airtight!

Here’s the official word on FSS 2.0 directly from the Club’s website:
[blockquote]

After the fantastic success of FSS 1.0, the G.I. Joe Collectors’ Club now brings you version 2.0! The FSS is only available to active club members. This service is an optional feature and is not included in the cost of your annual GIJCC membership.The FSS 2.0 subscription set will consist of twelve different carded 3 3/4″ figures. You will receive six shipments starting in approximately September/October of two figures each month. Figures will be shipped in a surprise sequence (figure pairs will be the same for everyone each month). It will be a surprise each month as to which figure pair you receive! Your last shipment (6th shipment) will include your FREE mystery carded 13th figure! The limited edition GIJCC Figure Subscription Service contains a variety of fan requested characters from all eras of the 3 3/4-inch G.I. Joe A Real American Hero collection. The assortment includes 25th Anniversary style figures of characters from the classic 80’s, 90’s, new-sculpt, foreign editions, and unreleased 25th Anniversary characters as well.

So there you have it!  The roster, a few teaser images, and the link to sign-up for FSS 2.0!  I have to admit, the first one made a believer out of me.  Yes, I’m not happy about the price of the figures or the subscription at all but then again, like a lot of Joe fans, I’m a man of limited means.  However, for the most part the quality and character selection of the first series has been very good and it’s now to the point that I eagerly anticipate the arrival of the brown cardboard box from the GIJCC each month.  So it’s a safe bet to say that this particular Joe addict is in for his next 13 figures from the GIJCC– even if my credit card cries a little.

For those of you on the fence, you’ve got until the 22nd.  Plus, JBL will begin reviewing all of the figures from FSS round 1 starting NEXT WEEK! 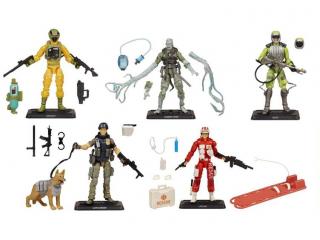