The New Jersey Collector’s (NJCC) returns to Cherry Hill this Sunday and they’ve got a full slate of giveaways/door prizes including another awesome fan-produced figure: Mega-Marine Mirage!

The figure you’re looking at is completely fan-produced– courtesy of the talents of guys like Kevin Watts, raginspoon,CobraStickers.com, and the casting master, nova. An update to the original 1993 Mega-Marine figure, Mirage takes a 20 year old figure design and brings it firmly forward into the 21st century with style!

Here’s the word from the convention organizers, quoted from HissTank.com:

We are now just a few days away from the August 18th Summer NJCC, here is full gallery 40+ images of NJCC Mirage!

Mirage was introduced in 1993 as part of the Mega Marines subline of G.I. Joe A Real American Hero! Make sure to check back to see the full figure with card art and sticker sheet.

I’ll be honest here– this figure is a knock-out in my opinion.  It’s a modern update of a classic design that is still immediately recognizable as Mirage!  The overall parts combo works to produce a figure that shows that fan-produced customs can meet if not exceed the quality of Hasbro-produced pieces at times.  My only regret with this figure is that I have no way to attend the con this weekend and therefore won’t be able to snag one.  For those of you who are lucky enough to do so, appreciate him for the 1:18 piece of plastic awesome that he is!

This is just proof that when the “A-Team” of nova, raginspoon, cobrastickers, and Kevin Watts come together on a project good things will happen.

Check out some pics of this amazing figure below:

Fans of custom figures in the G.I. Joe community are probably familiar with the name “Kevin Watts.”  Know for his imaginative parts use and mind-blowing painting skills, Kevin is the mastermind behind the Canv-HISS project showcased at the 2013 G.I. Joe Collector’s Convention.  He’s also the project lead behind last year’s amazing Metal-Head fan figure that was given away at the New Jersey Collector’s Convention.  Well, it would seem that Kevin and his talented crew of customizers are back in action once again– and have revealed this year’s NJCC exclusive giveaway figure.

Right now, I really really HATE Kevin.  I had the same reaction after last year’s Metal-Head figure.  It’s not because it’s a bad figure or anything like that.  It’s due to the simple fact that there is no way I’ll be able to obtain one of these.  The figures are door-prizes– given away to attendees of the NJCC and are not officially sold in any other capacity.  Also, they’re custom figures produced by hand– meaning that the production run is INSANELY low.  I was fortunate to see a “prototype” of this figure at Joe Con this year and I can say that is doesn’t disappoint.

If you’re in the area, here’s information on the NJCC:

More information on this figure and the event can be found over at  HissTank.com.

I promised yesterday that I’d go back and take pictures of the remaining custom figures on display at JoeCon.  Thankfully, there was enough of a break in the schedule today that I was able to fulfill that particular promise.  Again, the custom work by these folks is not to be underestimated!  Just some truly brilliant and exciting pieces shown here in Indianapolis.

G.I. Joe customizers– my hat goes off to you all!

One of my favorite parts of any JoeCon is the display of custom figures up for judging.  I’m not a customizer myself.  (Just a hack writer who likes to shoot pics of figures and offer opinions under the guise of a “review.”)  However, I am in awe of the creativity and inventiveness of the G. I. Joe fan community when it comes to customs.  Whether it be a simple repaint or a complete transformation of one figure into another, the individuals that showcase their talents here deserve ever ounce of recognition that the community can give them.

So, you’re sitting there saying “enough gushing– GET ON WITH IT!” I couldn’t agree more so below are most of the custom figures that were on display on Friday.  I was shooting these as judging was happening and could only get half so look for another update tomorrow.

The folks over at JoeDeclassified.com have launched “The Ultimate Custom Contest” with a bevy of prizes that are hard to beat!

Check out the official announcement:

Joe Declassified and Joe Customs have joined together to bring you the ultimate custom contest! Here at Declassified, you know we love the history of the G.I. Joe brand and we love the production process – which leads to your chance to recreate unproduced Joe toys in order to win some pretty swell prizes.

1. Customs may be figures or vehicles.
2. Any customs created for any prior contest, or that have been shown prior on the web are automatically disqualified. Customizers should submit a photo with their entry that shows their construction materials with any dated item (magazine, etc) created after the contest start date.
3. Customs must be of an unfinished Hasbro product (Rocky, for example). Anything that ever existed in any state of design is eligible. Please see the references at the bottom for further inspiration.
4. All entries are due no later than 15April2013.
5. All prize-winning customs become property of Joe Declassified, and will be auctioned off, with proceeds going to help support future Declassified endeavors. If contest winners do not wish to participate in the fundraising process, we will select the next highest rated customs to take their place.
6. No more than 3 custom entries per individual.
7. Entries MUST include real name, any online screen names, city and state of origin. All entry photos should be submitted to damnedmp@gmail.com. Please include no more than 10 photos per entry. Any questions or clarifications of contest rules should be sent to the same email address.
8. All judges and Joe Declassified staff are automatically disbarred from entry.

2nd prize: all 13 Club FSS figures (these will ship to the winner after all 13 have been released)

Judging will be on a rating system among several categories. Points assigned by each judge individually will be averaged to determine a winner.
Judges will include:

The sites listed below all include some preproduction material, but are by no means intended as an all-inclusive list.

Additionally, not only do we have big prizes and big name judges, but true to Declassified form we also have some big reveals to accompany the custom contest. Over the next few weeks, in conjunction with Joe Customs, we will be revealing some previously unseen G.I.Joe 80’s history in the form of concept art images and sculpts. These concepts can be used for your customs for this contest as they are all unproduced material. See the sneak peak images below, and get ready for more to come. Keep an eye both at JoeDeclassified and JoeCustoms over the next few weeks for more inspiration and history!

Start preparing the parts bins and dust off those painting skills– this is going to be one contest to win!

I have a confession to make– like a lot of GI Joe fans, I’m a bit of a closet Transformers fan.  Granted, my favorite era of Transformers was “Beast Wars” which may or may not hinder my “bot cred” but I’m also a fan of early G1 as well.  There’s something oddly classic about those first few series of Autobots and Decepticons that utterly transports me back on the nostalgia train to the early 80’s.  So, you can imagine my shock/delight/utter joy when I first saw this image on the web the other day: 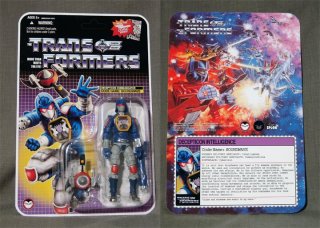 Insanely talented customizer, friend of JBL, and all around great guy Pierre Kalenzaga (aka “Airmax” from RTM) recently unveiled one of the most AWESOME custom mash-ups I’ve ever seen.  Taking the classic G1 Soundwave design and transposing it into 1:18 scale GIJoe form, he’s created a masterpiece of custom work.  Even better– he made 5 of them!!  (At this time TWO of them might still be available for sale.)

Here’s Pierre’s original comments on the figure (which includes custom Lazerbeak and features a real working lenticular on the chest):

To all my toy friends – just wrapped up this custom project. Five custom carded GI Joe scale Soundwave figures with Laserbeak drones. Four of them are for sale ($80). If you’re interested, please drop me a line. Spread the word :0)

You can check out more of Airmax’s work at his personal website AirmaxAnimated.com!

Joesightings will be conducting a new art and custom contest, and they have tons of great prizes for the winners!  Check out all the details at: https://joebattlelines.com/phpBB3/viewtopic.php?f=103&t=16389!

I  just got the word from the judges! But before I announce the winners, I have to thank some people.

First off, is Richard Woodhouse from the G.I. Joe Design Team. Richard taught a custom class at the JoeCon in Kansas City, and encouraged us to think outside the box. Next I want to thank the judges: Fred (Leonardo T. Dragon), Justin (General Hawk), and John (Alyosha). I also want to thank the sponsers: Broken Arrow Toys, Smalljoes.com, Marauder John, General’s Joes, and Hasbro. Lastly, I want to thank you guys for taking a chance on a contest where you didn’t know what you were going to be customizing.

All of you did a great job, and I hope you will join me again next year when we do this again!

And the winner of The Outside the Box Contest, is Storm Shadow by Yoho Joe.

I need the winners to PM their real names, addresses, and e-mail info so I can pass them on to the people sending you your prizes. I will also contact you on how to get your online prizes.

Well the time has come for the Judging to begin check them out here and after the judges have had their say I will open it up for everyone’s comments.