G.I. Joe Resolute is back on shelves of Walmart stores!

The micro series debuted on Cartoon Network’s website back in 2009 as a series of 10 minute webisodes.  Penned by writer Warren Ellis, Resolute took a decided darker tone with the G.I. Joe: A Real American Hero mythos that included the off-screen deaths of several core characters.  It also featured what may be the first definitive animated footage of G.I. Joe characters using weapons that fired actual bullets!  (Yes, I realize that there are shots in Sunbow that show shell casings but the weapon’s discharge is still indicated to be laser beams.)

G.I. Joe Resolute spawned a few action figures and then POOF!  It was gone!  Whatever the intent behind the project was it certainly wasn’t a long-term marketing push.

END_OF_DOCUMENT_TOKEN_TO_BE_REPLACED

When it rains, it pours– at least for Joe fans.

By MARC GRASER
At major retailers nationwide, something is missing from the toy aisles: “G.I. Joe: Retaliation” action figures. In their place, an empty space.With Paramount moving the actioner from June 29 to March 29, 2013, to give it more muscle at the box office with 3D, retailers are being asked to send back the line of Hasbro toys that were starting to appear on shelves.

Some Walmart, Toys R Us and Target locations had started to stock the toys this week, although they weren’t supposed to make them available until next week. Those that did wanted to get a jump on demand, and some of the 47 items that would’ve been sold are expected to show up on eBay at inflated prices by the end of the weekend.

In a statement, released Friday, Hasbro said: “G.I. Joe is an ongoing consumer franchise and therefore there is merchandise available to consumers. There is a limited amount of ‘G.I. Joe Retaliation’ product at retail now, but in light of the movie moving out to March 29, 2013, the majority of the movie line will be made available early next year in time for the film’s release.”

END_OF_DOCUMENT_TOKEN_TO_BE_REPLACED

Last night, during an impulse toy run prior to beginning “Turkey Day” preparations, I spotted the Walmart-exclusive “Ninja Battles” set at my local store.  (Pekin, IL for those of you in the area.)  They were stocked in abundance with at least 12 units on the shelf– three times what remains of the exclusive Battle Stations in this particular store.

For those of you who are interested– they’re out! 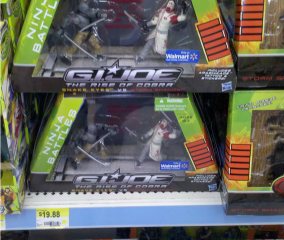 If the stores in your area are anything like those here in central Illinois, they’re sitting on a GLUT of “Rise of Cobra” figures and vehicles.  After stocking the line late and seemingly over-ordering the first few waves, the nation’s largest retailer finally seems to have taken a more proactive strategy.  As of this morning, “Rise of Cobra” figures are on “Roll-back” from $7.88 to $5.00!

Hopefully this puts a dent in the growing piles of Desert Attack Dukes, Accelerator Suit Ripcords, Neo-Vipers, Destro’s, and Baroness figures that are clogging the pegs locally. 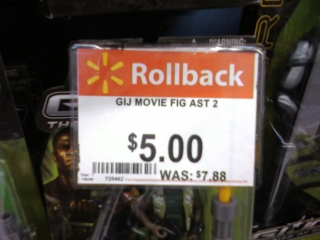 Cmderinchief returns from his temporary reprieve with more pictures of figures that are soon to be hitting store shelves!  Showcasing retail exclusives for both Toys R Us and Walmart, this two-pack and single-carded figure are sure to make fans of the “Rise of Cobra” era giddy with delight– or at least put a slight dent in their wallets.

Remember the end of “Raiders of the Lost Ark”?  The final scene where the Ark is crated up and hauled off into a seemingly endless warehouse full of other boxes- apparently never to be seen again?

Such is the fate of the “Rise of Cobra” two packs on Walmart.com.  They don’t show up under the “action figures” or “G.I. Joe” categories and they do not show up if any of the character names are searched.

Thanks to our sister-site GeneralsJoes.com, we at least have links to the sold-out products.  (They were in stock for all of one day.)

If you follow the news at GeneralsJoes.com (and you SHOULD), you might remember this piece about “Rise of Cobra” dog tags.   Apparently those little kiosks at the front of the stores have finally been updated as Madmac41 just sent in pics of his custom “RoC” tags!

Check out the pics below!

Cmderinchief has posted pics of the Walmart Exclusive “Off Screen” 2 packs head over to Lights! Camera! Cobra! to check them out.

From the Super Poseable Blog, check out this latest batch of listings…

Sunday, April 19, 2009
New G.I. Joe Rise of Cobra listings!!!!!
My manager friend came through with some new G.I. Joe lisitings. No UPCs this time cause it does take longer for him to get and really from the few messages I het when it hits other sites, not many people can use them.