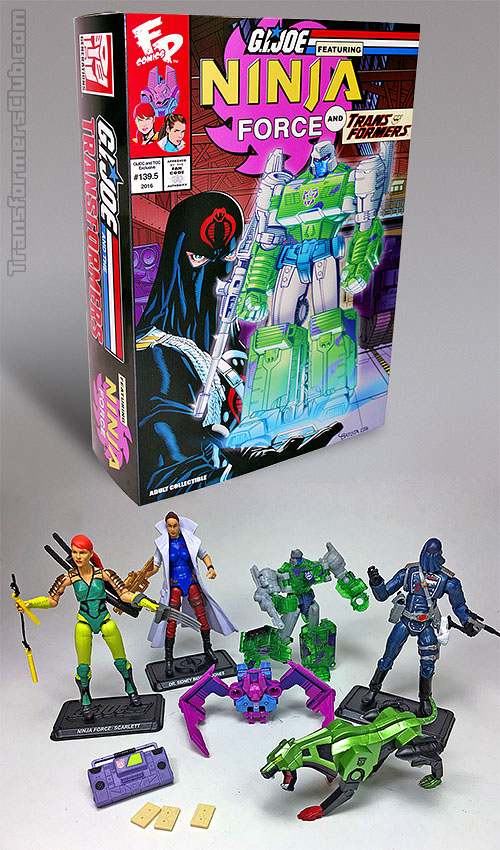 END_OF_DOCUMENT_TOKEN_TO_BE_REPLACED

A final G.I. Joe vs. the Transformers set has been revealed at Botcon 2016!

Fun Publications may be in its final year as the show-runner for both the annual Botcon and Joe Con events but that doesn’t mean that they’re slowing down on their exclusive products.  Yesterday at Botcon 2016, a brand new G.I. Joe vs. the Transformers set was unveiled– based on the launch of Transformers Generation 2 as it appeared in G.I. Joe: A Real American Hero vol 1 #138 – #142!

Eagle-eyed fans will recognize the cast of this particular set but just in case you don’t, here’s the breakdown:

I’ve got to give the folks at Fun Publications credit– this is certain a more interesting-looking set than the second “Only Human” set featuring synthoid Arcee and Rodimus Prime.  Joe fans are going to want this set pretty much exclusively for the Ninja Force Scarlett figure and maybe the Dr. Biggles-Jones, the brilliant scientist who was featured heavily in those G.I. Joe vs. the Transformers issues.  As far as Cobra Commander– it’s the same figure was last seen in the Dollar General series with some additional paint apps and equipped with the gun Megatron seen in the 2011 SDCC set.  I’m not a big enough Transformers fan to tell you if the Megatron and Ratbat figures are highly sought-after repaints or not.

No price point was announced but considering that Fun Publications is ending its license with Hasbro at the end of the year I’ll bet that these are available at Joe Con 2016.

What do you think of this latest G.I. Joe vs the Transformers offering?  Are you interested in these sets?  Will you be keeping all of the figures or selling off the Transformers?  Let us know in the comments below.