Another G.I. Joe FSS 5 preview has been released – Z-Force Gaucho!

It’s no secret that I’m a HUGE fan of the 2015 Gung-Ho action figure which I regard with the same reverence that some folks reserve for their favorite sports teams.  It is an AMAZING figure that fixed ALL of the issues I had with the abominable 25th Anniversary release and then some.  Seriously– it’s one of the best pieces that Hasbro has released in years and nothing will ever persuade me otherwise.

Gaucho, from his very origins, was a repaint of Gung-Ho and so, it seems logical that the Club would take the path of least creative resistance and merely re-release Gung-Ho in a different color scheme.  I should be fine with this… except that I’m not for the simple reason that this figure looks like a lazy repaint to me.  When Gaucho was released as part of the 2010 convention set, his skin tone was changed to reflect his ethnic background and it really helped to set the character apart from Gung-Ho who is, in my opinion, one of the more visually distinctive members of the G.I. Joe team.  As such, I was expected the G.I. Joe FSS 5 version to be similarly produced.  Call me crazy, but this just feels lazy to me.  Even the FSS 4 Jammer wasn’t just a straight repaint of the 25th Anniversary Stalker.

Sorry Gaucho fans, but you deserve better than this figure.

To subscribe to the FSS, head on over to GIJoeClub.com and JBL for more G.I. Joe FSS 5 reveals and news! END_OF_DOCUMENT_TOKEN_TO_BE_REPLACED

The G.I. Joe Marine Devastation two-pack reviews have been posted!

It feels like I’ve been waiting to pen this review for two years now— ever since this new Gung-Ho figure was unveiled at the end of Saturday’s events during the 2013 G.I. Joe Collector’s Convention in Indianapolis.  Two long years of waiting for a truly breath-taking update of my favorite Joe.  It wasn’t until this year’s Joe Con that the G.I. Joe Marine Devastation set was announced and Gung-Ho was finally slated for release.  Even better– he was being packaged with a sinister-looking Cobra Shadow Guard!

When the pre-orders for the new cases hit EntertainmentEarth.com, I jumped and within a few days the G.I. Joe Marine Devastation set was FINALLY in my greedy little hands.

Was it worth the wait?  Can any figure truly live up to two years of fan anticipation?

Check out the G.I. Joe Marine Devastation reviews over the G.I. Joe 50th Anniversary Review Index and then let us know your thoughts on these figures in the comments below!

With the pre-orders selling out at ToysRUs.com in just a few hours this is a great way to get at least one of everything by ordering a case, with FREE SHIPPING, for $119.99.

Seriously– unless you’re someone who loves the retail hunt, here’s a great way to snag the G.I. Joe 50th Anniversary 2-packs from wave 3 and get a few extra troops to boot!  Just click on the link below and you’re all set.  (Plus, your purchase helps JBL in the process.)

Thanks to my good buddy Mike Breaux of TheBreauxShow.com for the tip!

Sure, it’s been over a week since Joe Con 2015 ended and most of the news from the event has already washed over the fandom like a tsunami.  However, it’s become a bit of a tradition here at JBL HQ to post a summary of the event.  I’ve updated the Joe Con 2015 coverage page with links to previous posts and added in some new commentary as well.

Also, a big thanks to the crew at ToyWorldOrder.com for recording Dave Tree’s awesome UK Action Force panel which I’ve embedded in the coverage.

Also, keep your eyes and ears tuned to JBL as the 2015 G.I. Joe Collector’s Convention set review is coming!  Pics are mostly done and now it’s on to the text!

Here at JBL, we’re suckers for good G.I. Joe artwork and the website 3DJoes.com.  So, imagine the utter glee that was experienced by one admin in particular when the following announcement went up on 3DJoes regarding their recent carded artwork poster project!

The first “Carded 3DJoes” poster is here! It features every single carded figure from 1982-1985. That’s 49 unforgettable Joes and Cobras on one 24″x36″ poster!Paper details: All 3DJoes posters are printed on 65 lb. sterling premium gloss paper stock. According to my printer, 65 pound paper is the thickest you can use and still roll them without creasing or damaging. It wont easily crease, pinch, or wrinkle. These posters are definitely frame worthy, but the paper is thick enough that if you just want to tack them up, that will work too.

Printing details: We use a four color printing process (CMYK), not digital. Four color prints are much higher quality than digital laser prints. To see behind the scenes at the printer, check out my “3DJoes of the 80s” album on Facebook.

Cost: All 3DJoes posters are an even $20 a piece, plus an estimated $9 for shipping. Comic/Collectibles dealers: please contact me for bulk purchase discounts. Orders of 20 or more are half off!

Why: Proceeds will help pay the $80/month that I’m paying to Arqball for their pro subscription. More info on that here: Pricing » Arqball Spin Blog  Fan response has been great and visitors enjoyed 47,000 spins last month, so hopefully I’ll sell plenty of posters!

Wow!  1982 – 1985 were considered by many to be the peak years of the original A Real American Hero toy line.  These were the years that introduced fans to most of the line’s core characters from Snake Eyes to Cobra Commander to Firefly to Shipwreck to the Dreadnoks!  49 nine of your favorite characters stunningly reproduced on heavy card stock in a gorgeous 24 x 36 image?  This promotion already had me at “poster” but the fact that this is also helping to offset site maintenance costs for 3DJoes.com just makes it a complete no-brainer!Seriously– we’re moving into third quarter now and that means holiday shopping has begun.  (Or, at least, you might want to think about getting started.)  What better gift for the Joe fan in your life than one of these posters hanging proudly on the wall of their office/den/Joe room!

Check out the “Carded Joes 82 – 85” page over at 3DJoes.com for ordering information!

The 2013 G.I. Joe Collector’s Convention has come and gone and the summary of this year’s JoeCon has been posted.

I’ve updated the G.I. Joe Collector’s Convention page with the latest con summary including links to all of the previously posted content as well as a final wrap-up of all things that I observed in Indy.  It’s not a complete record of EVERYTHING– simply because that wouldn’t have been possible.  For example, I missed out on the What’s on Joe Mind taping because of a call from Madmac41 that the Concept Vault figures had been put on display.  So, any omissions are not intentional slights– but rather a reflection of the fact that one person can only be in one place at a time.

Also, due to some registration wackiness, my convention set will be arriving when the Homefront Heroes sets ship.  However, I’ve got some quick images up and reviews of the souvenir items will begin THIS WEEK!  (Lady Jaye is most like going up first.)

It was a great overall experience to reconnect with so many friends I’ve not seen in years.

Anyway, check out the 2013 JoeCon Summary directly or hit up the G.I. Joe Collector’s Convention Index to peruse previous years!

This year at JoeCon many fans seemed disappointed that Hasbro didn’t have more to showcase in terms of new product.  During the Hasbro panel, it was announced that there was nothing new to see due to the six month delay of the release of G.I. Joe Retaliation.  So, attendees steeled themselves and found other news to be excited about.

I was sitting in the “What’s On Joe Mind” panel when my cell phone rang.  It was Madmac41 telling me to get my keester down to the dealer’s room and bring my camera.  So, I sauntered down, spotted him, and then dropped to my knees in awe.  (Literally.)  There, in the midst of the Hasbro case were new “concept case” figures and right smack dab in the middle of them was the greatest Marine to ever grace the team’s roster: GUNG-HO!  (Suck it, Leatherneck.)  Seriously– completely unannounced and unexpected.

There’s no guarantee that these figures will get made but are merely presented as means of gauging interest.  So, this is one of the few times that I’ll ask anything of the fandom– if you have the opportunity, drop the name GUNG-HO at every opportunity.  After all, he was one of the core characters in the Sunbow series as well as Larry Hama’s Marvel run.

With no further comments, here are the 2013 Concept Case figures:

3DJoes.com is back with more G.I. Joe: A Real American Hero figures added to their already impressive archives!  The latest addition encompasses one of my favorite years of the classic Generation 1 Joes: 1983!  Featuring Gung-Ho, Duke, Doc, as well as as the 1982 “fixed” figures that we re-released with the now signature “swivel arm battle grip.” 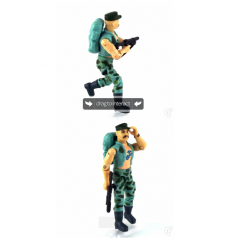 Check out some more preview images below!

Today would have been Chris Latta’s 63rd birthday.

Born on August 30, 1949, Christopher Charles Collins was an actor, comedian, and voice artist whose talent breathed life into countless characters.  Among his most famous were the Sunbow animated versions of  Cobra Commander and the treacherous Decepticon Starscream.   Other characters included his first voice role Sgt. Knox (Starblazers), Wheeljack (Transformers), Gung-Ho (Duh!), D’Compose (Inhumanoids), and the debut appearance of Montgomery Burns (The Simpsons).    Other live-action appearances include Road House, Married… With Children, and Stop! or My Mom Will Shoot!

Just a quick reminder– the “Concept Case” poll over at GeneralsJoes.com ends Monday!  If you’re dying to see some of those G.I. Joe figures released, make your voice heard BEFORE Monday July 23, 2012.  To vote, just click the image link below.

On the subject of electioneering, some GUNG-HO fans of a certain Innuit mercenary have put together a short video tribute for their top candidate.   Check out their campaign efforts over at VoteKwinn2012.com and watch the video below:

Lastly, let’s not forget the greatest Marine in the whole of G.I. Joe history– the ragin’ Cajun: GUNG-HO!  Don’t let this be his only original Generation 3 version!  (I don’t count the too-short Walmart Resolute version.)