The past few years have seen more G.I. Joe/Transformers crossovers than I would have thoguht possible including three SDCC exclusives from Hasbro.  This year Fun Publications, the company behind both the G.I. Joe Collector’s Club and the Transformers Collectors Club, announced two different crossover sets– one featuring Marissa Faireborne, the daughter of Flint and Lady Jaye, and a second featuring a beloved character from the Transformers episode “Only Human.”  In this episode, the villain Drath approached an indvidual named “Old Snake” for his synthoid technology, something that Cobra had used numerous times in the G.I. Joe cartoon.  Old Snake, as most fans will immediately recognize, was intended to be the future version of Cobra Commander! END_OF_DOCUMENT_TOKEN_TO_BE_REPLACED

When this figure was announced at the 2014 G.I. Joe Collector’s Club, my reaction was less than enthusiastic.  After all, who would want a figure based on a character’s appearance in just a few short scenes in the animated G.I. Joe: the Movie?  Plus, hadn’t Mindbender already been released back in 2009?  Was there really a need to update him?  Apparently, there was and the result is surprisingly… well, you’ll have to read the review to find out this Joe fan’s opinion!

To paraphrase Roadblock: “If you’re hankering for some Sunbow G.I.Joe, head on over to Vimeo!”  And now you know…

General Hawk, General Franks, Dr. Benton Quest, Doggy Daddy, Mr. Slate– these are all characters that were brought to life by the incredibly talented John Stephenson.  The voice actor passed away on Friday May 15, 2015 at the age of 91.

His career spanned an impressive 57 years in the entertainment industry with his first credited role listed in 1953 and his last in 2010.  Before his move to voice acting he was a prolific character actor in the early days of television with appearances on notable series such as The Lone Ranger, F Troop, The Beverly Hillbillies, Get Smart, Perry Mason, and even Hogan’s Heroes. He was also the voice that announced the verdicts at the end of episodes of the popular series Dragnet.

Later, he moved to voice acting and was possibly the most-used talent at Hanna-Barbera Studios providing voices for Fred Flintstone’s boss Mr. Slate, Doggy Daddy, and was the original voice for Dr. Benton Quest on Jonny Quest before the role was assumed by the late Don Messick.  His IMDB page lists over 230 acting credits.

Eventually John Stephenson went to work on many of the Sunbow animated series that fans of JBL are familiar with– providing the voices for such characters as General Hawk (substitute in “The Spy Who Rooked Me”), General Franks, General Flagg, Dr. Lucifer, Granak, Kup, Thundercracker, and Huffer for G.I. Joe: A Real American Hero, Inhumanoids, and The Transformers.

In his final years he was diagnosed with Alzheimer’s and had been living in a retirement home.

Rest in peace, John.  Thank you for all the hours of entertainment you’ve given us. Your talents will be missed.

Do you miss having the Sunbow G.I. Joe Complete Series on your favorite streaming service?  Well, now you can pick up the classic animated cartoon saga for 50% off!

That’s right, it’s every single episode of the classic G.I. Joe Complete Series that ran from September 1983 to November 1986 in first-run syndication.  All 95 episodes are presented in this single slim pack case collection; everything from Fatal Fluffies to Cold Slither to Excalibur to the window cleaning services of “The Viper.”  Even better, it’s in a nice case that stores better than the previous footlocker edition. END_OF_DOCUMENT_TOKEN_TO_BE_REPLACED

As reported yesterday by Wired.com, Hasbro Inc announced yesterday that they were partnering with video sharing site Vimeo to be the exclusive online host for many of the toy-maker’s animated series.   Currently available are Transformers (Generation 1) and Jem & the Holograms with other series including G.I. Joe: A Real American Hero and My Little Pony to follow later this year.

Per the announcement, episodes of the Hasbro series will be $.99 to rent for 24 hours or $1.99 to purchase individually.  Entire series may be purchased for $40.00.

Is this a good move for the Pawtucket-based Hasbro, Inc?  By the numbers, it means that Hasbro’s animated properties will be delivered to a significantly smaller audience.  As of Q1 2015, subscription-based Netflix had an audience of just over 60 million global subscribers. As of December 2013, Vimeo was sitting at 22 million subscribers.  It’s not a strict apples-to-apples comparison as far as the dates go but it indicates that Vimeo doesn’t quite have the reach that content posted on Netflix does.

There’s also the issue of the the pricing model.  Increasingly, more and more digital content has gone “pay-to-play” requiring viewers to either rent or purchase episodes on a platform-to-platform basis.  Vimeo follows that model meaning that fans will have to pay around $40 to own a full season of their favorite nostalgic series.  This puts it on par with the cost of owning the content on DVD and Blu-Ray from retailers such as Amazon.com but it leaves casual fans a bit out-of-the-loop.  Rather than being able to randomly browse through a few episodes of a series before getting hooked, viewers will be have to pay to rent or view episodes on an series-by-series basis.  This could limit the Hasbro content’s overall reach when it comes to new viewers rather than diehard fans who most likely already own the content in tangible form anyway.

What do you think?  Is the move to Vimeo better for Hasbro?  Will is help grow the audiences for their animated properties?  Will you be making the jump to the new video-sharing service in order to follow the adventures of your favorite characters?  Let us know your thoughts in the comments below!

The fan-run convention Retro Con gets better and better with each new announcement. First, the event for 2014 has been extended to two days.  Next Zack Hoffman (the voice of Zartan from the Sunbow animated series) is added to the guest roster.  However, yesterday Retro Con pulled out all the stops– wrestling legend and “real life” G.I. Joe Sgt. Slaughter is now scheduled to appear for both days of the nostalgia event!   You can read the original announcement here.

Autographs or posed photos will be available for $20 with a discount being available for both. So grab your vintage Sgt. Slaughter file cards and make plans to head to Oaks, PA!

Long-known to fans of G.I. Joe from his appearances in the second season of Sunbow’s G.I. Joe: A Real American Hero series, Sgt. Slaughter joined WWE (then WWF) in the early 80’s and quickly achieved celebrity status.  Brandishing his signature move “the Cobra Clutch”, he delighted wrestling fans each week with his hard-nosed drill sergeant persona.  Yet it may be his appearance in the animated G.I. Joe: The Movie that permanently endeared him to Joe fans around the world with his leadership of the Renegades and his “itty bitty ditty bag.”

Retro Con 2014 will run from September 27 – 28 at the Greater Philadelphia Expo Center in Oaks, PA.  To keep up with the latest on Retro Con 2014, keep your eyes peeled to JBL and follow them online on Twitter at @Retrocons and at www.RetroCons.com.

Retro Con 2014, the annual celebration of all things 80’s, has just announced that Zack Hoffman, the voice of Zartan in the Sunbow animated series G.I. Joe: A Real American Hero, will be appearing at the two day event!

We’re happy to announce the addition of Zack Hoffman to our guest list! Zack is best known for giving voice to master of disguise ‘Zartan’ on the original 1980′s GI Joe cartoon created by Marvel Sunbow Productions!

Zack has also recorded hundreds of commercials throughout a career spanning over 30 years in the industry. In addition you may recognize him as the movie director in Pee Wee’s Big Adventure, when Pee Wee reclaims his bike after briefly impersonating a nun!

Most recently Zack has created his own One Man Show call Tuxedo Man, with another entitled The Last DJ coming soon! Check out his website to follow all his works past and present!

Zack will be on hand all weekend to sign autographs free of charge. We only request you limit your items signed to 2 or 3. We thank Zack immensely for agreeing to come out for the show!! 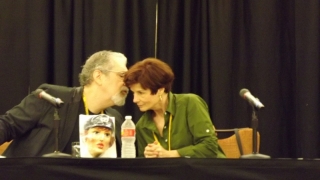 If you’re a fan of the Sunbow G.I. Joe: A Real American Hero series you’ll want to be at this year’s G.I. Joe Collector’s Convention!  Just added to the guest list is Bill Ratner- better know as the voice of Flint, the team’s premiere warrant officer!  Ratner will be joining Mary McDonald-Lewis (Lady Jaye) for what is sure to make for some exciting panels and fan interaction!  I mean– who didn’t like Flint?  (Plus, some of us remember Mr. Ratner from the Variety Arts Radio Network productions of The Adventures of Doc Savage!)

Check out the official announcement from the Club below:

01/28/2013 – We are thrilled to announce an additional guest to the GIJoeCon line-up. On hand for the entire weekend will be Bill Ratner, voice of Flint from the G.I. Joe: A Real American Heroanimated series!

Check out our special guest showcase and read their project bio’s…Click here! All will be scheduled for discussion panels and autograph sessions over the convention weekend.

Mr. Ratner was a guest on the popular What’s On Joe Mind podcast– featured in Episode #70!