Sigh… I hate this kind of post.  I really do.

Joe Con 2015 and G.I. Joe FSS reviews are coming.  Really.  I had photos shot for these reviews for weeks now and even have the web page built.  Joe Con 2015, Joe Con 2013, and the FSS reviews for Hit & Run, Alpine, Crimson Guard Immortal, Big Ben, and Frostbite are about 85% ready to go!

So, you might find yourself asking, what’s the holdup?

Between my current real-life job and some family obligations, I’ve just not had the time to sit down and really finish the writing.  Knock on wood I can sequester myself away this weekend for a bit and finalize my portion of the text.

However, I don’t want to leave folks hanging.  Below is a preview gallery of images from many of the G.I. Joe FSS and Joe Con 2015 reviews that will be hitting here soon.  Consider it a bit of a “mea culpa” for being so tardy. 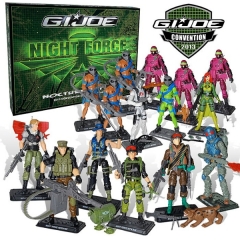 There are a metric ton of good toy-related podcasts and “geek shows” out there and now you can add one more to the list: The Breaux Show Live Radio Show!

Each Sunday evening at 9:30pm EST, video toy review and web series host Michael Breaux takes to the virtual airwaves via Google Hangout to broadcast a live 30 minute show that runs down the week’s “geek news” and current events.  This week topics ranged from the 2013 Super Bowl to the recently-revealed 2013 G.I. Joe Collector’s Convention set: Nocturnal Fire!  He even featured a “hack site admin” from a “familiar Joe site” who discussed his thoughts on this year’s surprising set reveals.

In all seriousness, I’ve know the host for many years now and always find his video shows entertaining.  He’s got a lot of enthusiasm for  action figures and toys in general and it shows!

You can watch the YouTube version of the episode below and check out the rest of his work over at TheBreauxShow.com!

With registration for the 2013  G.I. Joe Collector’s Convention imminent, the folks at the GIJCC have posted previews of the first three figures from this year’s Night Force set!  First up are Cobra Mortal, Cobra Letal, and Cobra Frag-Vipers!

So far, I’m liking what I’m seeing.  Some nice use of new tooling for the accessories of the Frag-Vipers and for the head gear on both them and Letal as well as a solid reuse of existing parts for the rest of the figures.  Cobra Mortal looks decidedly evil and you’ll never lose Letal in the dark with that day-glo speed skating suit of his!  Typically with these previews, the Club starts with the least-anticipated figures and works their way up to the ones that will make fans cry with joy– so I can anticipate some Night Force figures being revealed in the coming days.    I must say that I’m more excited about these troop builders than I was the Iron Grenadiers from last year so with only three figures in the GIJCC has my FULL attention.

Check out the pics mirrored below and visit GIJoeCon.com for more information.