One strength of the G.I. Joe Collector’s Club Figure Subscription Service has been its roster of characters.  For every TNT and Surefire, there’s been a Big Boa, Cesspool, and even a Nano BAT.  The FSS has breathed life into some of the more obscure figures who might never have received an update otherwise.  Case in point: Admiral Everett Colby – code name: Keel-Haul!

The good Admiral has the distinction of being the vehicle driver of the largest G.I. Joe vehicle ever produced– the incredible USS Flagg.  He’s also one half of the second-to-last shipment of FSS 2.0!  So, does this new version of Keel-Haul “blow me down” or should be just be consigned to Davy Jones’ locker?

When it rains, it pours in the land of G.I. Joe!

In the middle of all of the Toy Fair excitement, it has been revealed that the next shipment in the G.I. Joe Collector’s Club FSS 2.0 is now arriving.

I know… there are people who don’t want spoilers. For those folks, I can only advise you to STOP READING NOW.

Okay, for the rest of you… it’s one of the shipments I’ve been waiting for: the pairing of Keel-Haul and Bombardier!!!

Keel-Haul has always been a favorite of mine– ever since I got a USS Flagg for Christmas as a kid. Unlike his Sunbow counter-part of Admiral Ledger, Keel-Haul was a former fighter-pilot-turned-carrier-commander. With his slanted hat and Burt Reynolds moustache, he was just PURE awesome and the GIJCC and Boss Fight Studio nailed this perfectly!

Bombardier is a very interesting figure to me for a variety reasons.  Years ago I remember when pictures of a “blonde Flash” surfaced on the internet and yet no one could identify who he was.  It took years and the Action Force knowledge of Dave Tree and Ron Conner to reveal that this was originally intended for Palitoy’s Action Force!  In fact, it was a high point of the History of Palitoy panel at the 2013 G.I. Joe Collector’s Convention. You can read the full story HERE.

I’ve mirror the images that were originally posted at HISSTank.com but if you’d like to check out the original discussion thread, here’s the link! 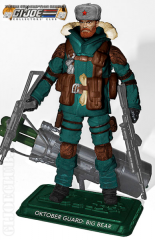 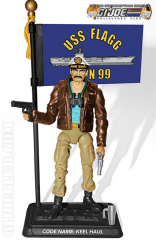