At long last the figure previews for the 2012 Collector’s Convention set have begun! 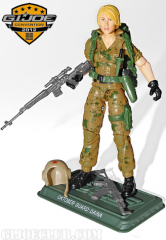 The Club’s tooling choices are solid this time with what appears to be a new head, new tooled helmet (possibly based loosely on the DTC Barrel Roll), and a very familiar Draguov sniper rifle.  The design works to give her a slightly more “bulky Russian military” feel than one would have expected.  (Personally I was thinking a straight-up reuse of either the RoC Cover Girl or the 25A Lady Jaye.)  Either way, it’s a great way to start off the convention set which makes me think that things can only get better from this point out!