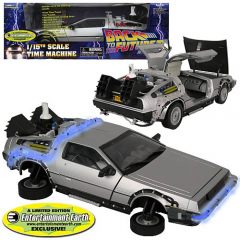 Yeah… a flying Delorean time machine that my Joes can use.  Seriously– toss in a small hover board and one of those color changing ball caps and I’m going to go to GEEK heaven.    However, that’s not all…

Michael Knight, a young loner on a crusade to champion the cause of the innocent, the helpless, the powerless, in a world of criminals who operate above the law. 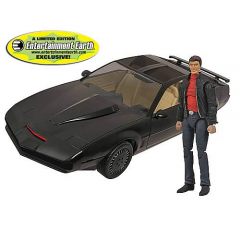 Seriously– what 80’s fan doesn’t recognize that monologue, accompanied by the pseudo-electronic tones of Stu Phillips’ memorable theme?  How many kids were GLUED to their televisions on Sunday nights waiting to watch “The Hoff” duke it out with everything from killer semis to biker gangs?  Who didn’t hastily copy down an address from a 15 second TV spot in order to send off for their KITT Kit?  (Back in the days before VCR/DVR technology– when you had to write it down REALLY fast!)  Well, the most awesome Pontiac Trans-Am to ever grace the airwaves has never had a real Joe-scale release… until now.

Hitting this October will be a version of KITT that not only talks but also includes an exclusive Michael Knight action figure!!  Okay, so the likeness isn’t a perfect “plastic Hoff” but the car will have actor William Daniel’s actual voice coming from under it’s tiny hood.  While I can live with an “okay” Michael Knight– the car HAS to speak in the correct tones.   Now if only a version of KARR is released– complete with Peter Cullen’s voice and a Joe-scale Garth Knight!    (Somehow I doubt we’ll ever seen an in-scale version of GOLIATH!

Check out this preview video of the prototype:

Now, before I gush any further I have to state one thing: JBL isn’t tossing up sponsor-tracked or affiliate links.  I’m not making ANYTHING by shilling these items other than sharing my enthusiasm for two products that fulfill a childhood dream.  However, I encourage anyone who finds these as insanely AWESOME as I do to snag one or both as increased sales can only convince Diamond to produce a few more “near Joe scale” items.  Could Street Hawk or even Airwolf be a possibility?  An 80’s fanboy can only dream…