The second-to-last convention figure has been revealed– the all-new General Iron Bear! 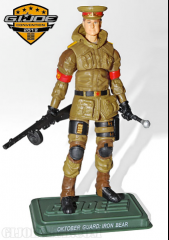 A brand-new character and apparently the subject of Operation Bear Trap, the good comrade general makes some decent use of the torso of the Arctic Trooper Snake Eyes figure from the 25th Anniversary collection.   The head sculpt appears to be all new and we have what appears to be a set of Resolute legs and Sgt. Slaughter’s baton.  Overall, it’s not a bad parts combo but the good general has a VERY young-looking face which very well could make him the Doogie Hauser of the former Soviet army.  Compared to Brekhov and the others, he looks more like a cadet than a full on general.  Perhaps “Iron Bear” is the English translation for “Baby Face”?   I’m not entirely sold on the code name choice which seems a bit mundane but the overall aesthetic isn’t horrible.  I still find it far easier to be excited for this new character than I do for the Iron Grenadiers in the set.

Only Horrorshow remains to be seen now.  (C’mon Fun Pub… don’t screw this one up!)