The Collector’s Club has revealed the 11th figure in their Figure Subscription Service and it is Peoria’s home town girl – Cover Girl! 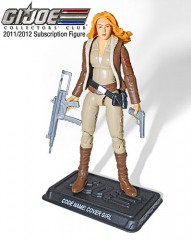 (Personally, I’m still hoping for a glimpse of Big Boa!)  As far as Cover Girl is concerned, I don’t think anyone is surprised by this figure construction.  The Club seemingly wanted to do Cover Girl in the 2011 Convention set and instead produced Sparta.  Change the hair color slightly, toss on a coat over the torso and you’ve turned Sparta into Cover Girl.  General Hawk even mocked this figure up using Photoshop in his review of the set!  It’s not the most inspired piece they’ve revealed thus far– which just leaves Big Boa and the bonus figure left.

No information of pricing or when the subscription period begins.   Until that time, I’ll be keeping my eyes on the official Figure Subscription Service page over at GIJoeClub.com.

Here’s a gallery of the offerings thus far.