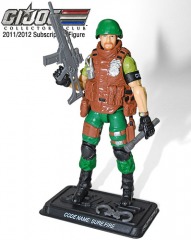 Sure Fire is latest reveal in the Collector’s Club Figure Subscription Service!

Based heavily on the 2002 v2 version, he’s the latest in a long string of reveals from the Club.  (It also looks like he’s got the same vest as the Renegades version of Law. )  Personally I hope his green is a bit more subdued in person as this one is almost bordering on neon.  It very well could be the lighting but it’s pretty garish right now.  That being said, I do prefer the v2 coloring over that of the original.  It fits more with the varied look of the Joe team with uniforms consisting of Hawaiian shirts and sports jerseys.  Sharp-eyed fans will note that this new version now sports a beard whereas the original v2 was clean-shaven.  I’m still not entirely sold on this subscription service yet; this figure pushes me slightly more in the “going to take the plunge” category but not very far.

As always, no pricing has yet been announced; fans will have to keep their eyes peeled on Figure Subscription Service page of GIJoeClub.com for details.