Big Boa has  been revealed as the 12th figure in the G.I. Joe Collector’s Club Figure Subscription Service! 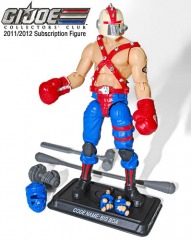 So this is it– the full reveal of the 12 figures in the sub.  It’s certainly an interesting mix spanning incarnations of Joe from Extreme to Spy Troops to A Real American Hero.

No information of pricing or when the subscription period begins.   Until that time, as always I’ll be keeping my eyes on the official Figure Subscription Service page over at GIJoeClub.com.  (Although they’ve been dropping more information on their Facebook page than on their site.)

Here’s a gallery of ALL of the offerings thus far.  As of now the mysterious “13th incentive figure” will NOT be revealed until he or she arrives on subscribers doorsteps.  That means it could be anyone from “Arctic Attack Sure Fire” to Cobra ninja Slice to a Pursuit of Cobra update of Ice Cream Soldier.

1 thought on “The final “Club Sub” reveal is Big Boa”