Super Joe has returned and he’s at the G.I. Joe Collector’s Club store!

In the history of G.I. Joe, no chapter may be more obscure than Super Joe.  The line followed the popular 12″ Adventure Team era which ran from 1970 – 1976 was a response to the rising price of oil and the increasingly popularity of science fiction and space opera, thanks to the premiere of Star Wars.  As a result, G.I. Joe was transformed into Super Joe, an 8 inch tall warrior armed with a light-up vest and alien opponents.  The series ran from 1977 – 1978 when it disappeared from store shelves with little fanfare.  This appeared to be the end of the line for the Super Joe concept– until the G.I. Joe Collector’s Club announced two new exclusive 12″ scale items in the Club Store.

Yes, it would seem that Super Joe has returned.  Sort of… 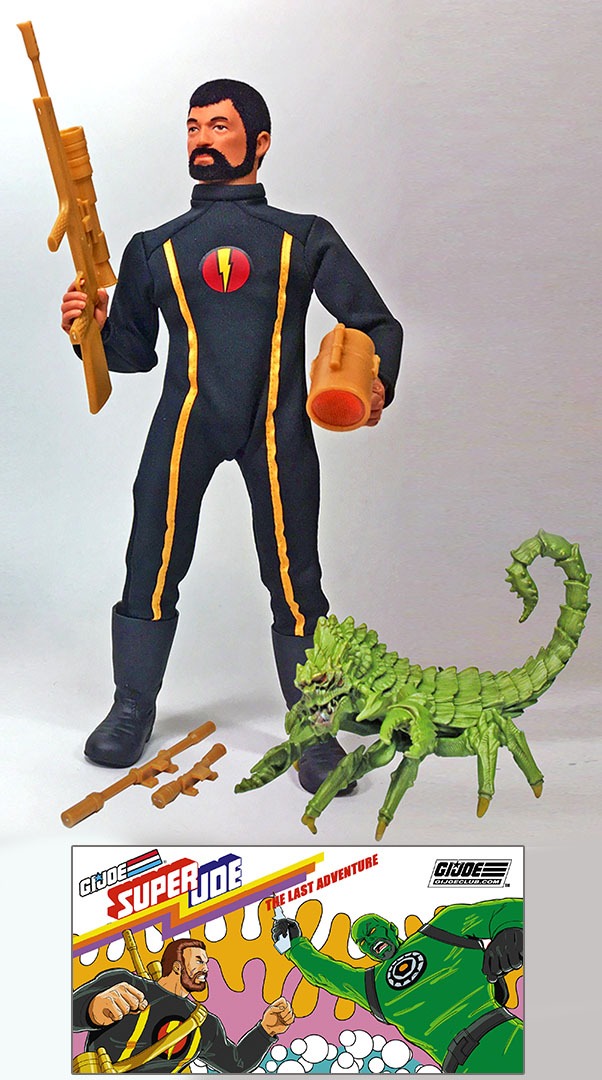 The Super Joe Commander is an homage to the classic 1977 figure— minus the signature light-up chest harness.  The figure retains the signature jumpsuit and the classic beard but instead has to make due with a hand-held flashlight.  Sure, it’s a far cry from the original accessory but let’s be honest– tooling up an entirely new harness for what is essentially a one-off figure isn’t exactly viable for the niche 1:6 G.I. Joe fan base.  However, Joe’s not alone as he comes with a miniature version of Terron, the dreaded light-sensitive monster that was a signature piece of the classic 1970’s line.  Terron is a lot smaller than fans may remember and, in all honesty, appears to be a repaint of the Safari Ltd Desert Dragon that is available at online retailers.

Okay, I’m going to give the G.I. Joe Collector’s Club props for this design.  The original Gor was a reptillian monster with a light ray in his chest and who was dubbed “King of the Terrons.”  Darkon was a green-skinned humanoid billed as “half human/half monster”.  In essence, he was a green release of the Super Joe Commander with no backstory offered to explain his bizarre moniker.  The Club, every thrifty, merged these two concepts with that of their 2013 1:6 convention set “Secret Mission to Dragon Island” to produce Darkon-Gor.  Essentially, the James Bond-inspired villian from that set, Sebastian Gorman, has been transformed into this bizarre half-man/half-monster concept– allowing the club to reuse the Joe Con head sculpt once more.  Darkon-Gor comes with a recreation of the original Darkon’s lightning bolt weapon.

While I’m not a huge Super Joe fan myself, I find these sets fascinating.  As a kid I apparently had a Super Joe Commander– something I discovered decades later while cleaning out boxes at my parents house.  However I was only four years old when the line debuted and have no memory of this at all.  Still, while these aren’t the Club’s usual vintage-obsessed near-recreations, they do some fairly close to the mark in terms of capturing the feel and style of the original Super Joe line.  Plus, by moving Super Joe from 8″ to 12″ they help this errant part of G.I. Joe history find a more permanent place in the 1:6 scale mythos that the G.I. Joe Collector’s Club has been building for the past several years.

Now if only some Super Joe concepts would make it into a future 1:18 Figure Subscription Service!

The pair of these figures will set collectors back a cool $154.00 plus shipping and are available for preorder at the G.I. Joe Club store.