Another convention figure has been revealed– an Iron Grenadier Elite Guard: 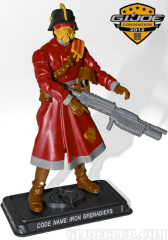 As stated the other day, the MARS troopers are based on a cancelled Iron Grendier pack showcased a year ago and borrow heavily from the Resolute pool of available molds.  Visually, it’s an interesting take on the Laird Destro’s personal army with the long coats and apparent cold weather gear.  Here’s a pic of that cancelled pack when it was shown at JoeCon courtesy of GeneralsJoes.com. 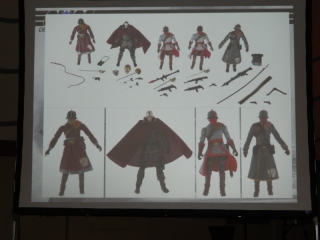 This is where I’m conflicted.  One one hand, it’s great to see the cancelled set finding new life with the Club.  It helps keep their development costs down and it allows fans an opportunity to snag these figures, albeit at a higher cost.   On the other hand, the IG’s in long coats are going to find their movement severely restricted from the waist down.  Also, this is rapidly turning into “the Rainbow Coaltion” of MARS as we’re merely getting a collection of long-coated IG’s in different colors.  (Yes, I realize the tooling is different but at first glance the color is what stands out the most.)  I’m still finding myself FAR more excited about the already-revealed Oktober Guard than I am for the Iron Grenadiers in this set.   Let’s hope that Horrorshow and Dragonsky get a reveal.  Soon.

(Let’s also hope that the Club can get the online ordering up soon.  The con is approximately just a month and a half away now.)