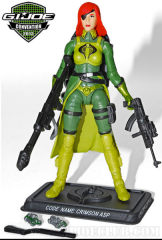 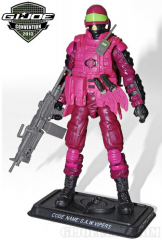 Okay, I’ve got to say that this is an interesting pair.  Crimson Asp has some nice details, using the Resolute Baroness body to good effect.  Her head sculpt reminds me of the one-eyed Russian spy from the animated series Venture Brothers and her overall color scheme seems better suited to a Marvel Comics HYDRA agent than a Cobra saboteur.  She most definitely did NOT come from the Firefly school of Saboteur Chic.

On the other hand, the Cobra SAW-Vipers are a near perfect update of the original ARAH era figure.  The body is covered with the same tac vest as the Iron Grenadiers from the 30th Anniversary line with the Retaliation G.I. Joe Trooper’s dual knife sheaths taking the place of the steady-cam gun mount.  It’s an interesting use of parts and one that shows a great deal of innovation on the part of the GIJCC.  The arms may look familiar– they were last seen on the 2012 Joe Con Oktober Guard Stormavik figure!

So tonight’s reveal is one solid win and one that I’m not entirely sure about yet.  Still, Nocturnal Fire is shaping up to be a very promising set indeed!