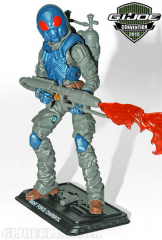 Okay, let me just say this now: WOW!  I’ve never been a huge Charbroil fan and when the Club announced that he was part of the set I just assumed that this would be a repaint of the Toys R Us exclusive version that debuted in the Rise of Cobra line a few years ago.  I couldn’t have been more wrong– as this figure uses the body of the brand spanking new Retaliation G.I. Joe  Trooper!  That means that this figure is going to have some pretty fantastic poseability!  Even better– he’ll be sporting a brand new removable helmet!

Okay Collector’s Club– you’ve made this set incredibly hard to resist and we’re only four figures in!   I can’t wait to see what the next reveal has in store for us!