The Collector’s Club has revealed another figure from the 2011/2012 subscription service– the blind fighting ninja Jinx! 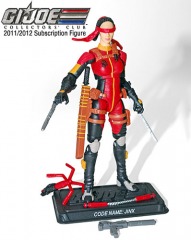 Very heavily inspired by the Valor vs. Venom version of the figure, Jinx also would appear to borrow parts from the cancelled City Strike Scarlett.  Either way, she’s a pretty solid addition to the Subscription cast of characters.

You can review all of the revealed figures below: