With the 2012 Joe Convention getting underway in New Orleans, you might expect that most of the Joe-related news right now is going to be centered around “Darklon is an exclusive!” or “Ice Cream Soldier is the parachute figure!!”  Well, imagine my surprised when Ben Yee of BWTF.com posted a link to a new website…

Currently more of a static image than a fully functioning website (although I suspect this is just a ‘preview’), FP Comics seems to be the publishing arm of Master Collector/Fun Publications.  It’s also a site where fans can order previous convention comics for both G.I. Joe and Transformers as well as a series called “Lydia vs. Zombies”.  (No idea what it’s about as the individual title links aren’t working right now.)  The current main pages indicates that comics will be available in the July edition of Previews from Diamond Comics Distributors.

It’s certainly an interesting move for the folks down at Cattle Baron Drive and one that could pay off for them in the future in a ‘print on demand’ kind of way.  With IDW Publishing regular Joe and TF titles I don’t know how much intial appeal this will have but if FP Comics starts to offer trade paperback versions of the monthly Joe news letter comics I know one particular site admin who will be placing an immediate pre-order.  (Seriously– the AT comic is surprisingly good!)

Check out the preview over at FPComics.com! 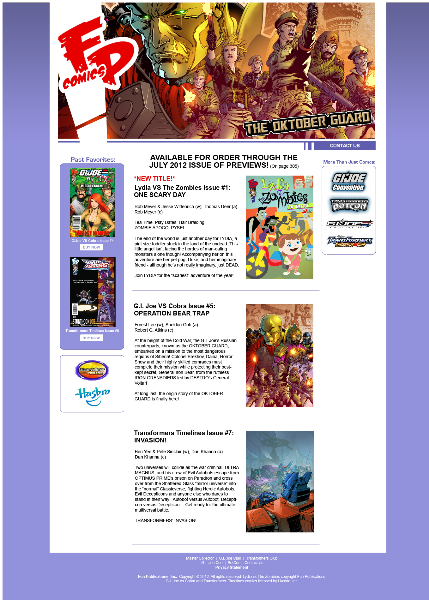