Somehow this one slipped by me yesterday but the Collector’s Club has unveiled yet another figure in the forthcoming Collector’s Club subscription service– Valor. vs. Venom pilot/sniper Barrel Roll! 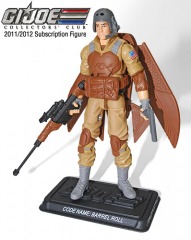 The Club seems to be borrowing heavily from his second deco in this figure design and it works.  The inclusion of the G.I. Joe Resolute jet pack works well enough as Barrel Roll has frequently been seen with such contrivances.  While I wish that we’d actually see some sort of new jet pack/glider being used for both Grunt and BR, the choices so far are still superior to the Air Assault glider that rears its ungainly head more often than it should.

The other big news is that the Collector’s Club has now launched a page for the Figure Subscription Service!  Collecting all of the previously released images, the announcement on the Club’s Facebook page promises that final details of the subscription will be revealed on the web page soon.